What Happened to Yahoomaps Driving Directions? 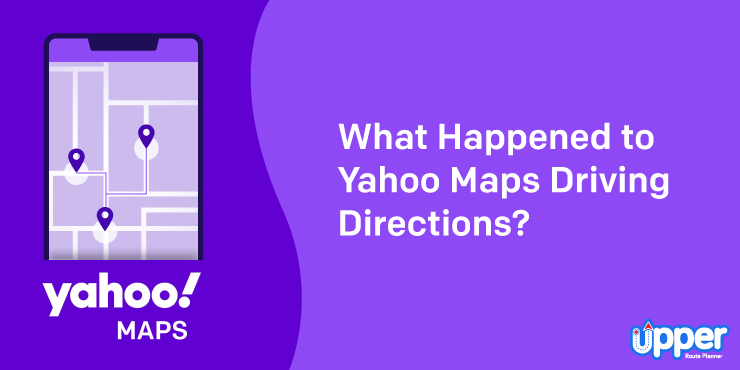 In the 1990s, there was one company synonymous with the internet, and that was yahoo. Yahoo was a juggernaut; at that time, it was the most significant internet company. It was the equivalent to Google at the time, and it was used for everything from search and was also known for yahoomaps driving directions. Unfortunately for them, Yahoo and Yahoo Maps are no longer prominent tools for driving directions or route planning, having been replaced by Google Maps, Apple Maps, Bing Maps, and others.

The Story of Yahoo!

Yahoo! was founded in 1994 in Sunnyvale, California. The company was one of the pioneers of the internet. Initially, it was a directory and a search engine. In the 90s, it was one of the most used websites on the internet, being one of the leading search engines. Initially, it started with a directory of sites, and later on, they created a crawler (a tool to look up new websites), and they had 20 human beings to classify them to help people find relevant information. In the early days, it also launched an email service, chatting, games, and more.

In the early 2000s, is where the struggles were starting. After acquiring their search engine, Inktomi, they ultimately ended up ceding search as their primary business; at that point, they were outclassed by then by Google in search. They were looking into becoming a media and entertainment company. They invested in music and movies as well as creating games, sports, finances, and news. To this day, the significant components remain the finances and fantasy sports.

They also created a Maps tool, and that’s the topic of our next section!

Yahoo Maps was created and launched in 1998. It was a free online tool that provided current location, driving directions, and various other features. These features include weather maps, live traffic maps, a route planner with multiple stops, a satellite map view, and other formats, points of interest like gas stations, hotels, yelp destinations, and much more. It was a comprehensive tool that offered a world of experiences to users. In 2006, Yahoo maps released local maps, and in 2007, it released a new style of maps

At its height, it was considered the premier mapping experience and had the best technology, UI, and included some pioneering features like “distance,” local business listings, local search on a map, selling ads, and more. It had a significant number of features and content experience, including:

On June 4th, 2015, Yahoo! declared it would be terminating Yahoo Maps for good.

What happened to Yahoo Maps?

If the company’s maps service provider was so extensive, then what happened? Why does it no longer exist? Many reasons point to the demise of Yahoo Maps, the main reasons in many articles are the following:

The competition has overtaken the once-dominant giant. Below are the new dominant players

What is the best map for driving directions?

The short answer is that the best tool for driving directions depends on your needs. Google Maps currently has the lead in terms of data, up to date maps, and features. Apple Maps is looking to gain in quality and experience. MapQuest is also looking to create a unique and useful knowledge.

Unfortunately, Yahoo Maps was discontinued in 2016. At that point, the features and functionality was too far behind the other dominant players (Google Maps, Apple Maps, etc.)

Yahoo Maps is a Thing of the Past

In conclusion, if you’re a small business owner and you’re looking to use a service to find GPS coordinates, a walking path to your destination, or driving directions for your car, you can no longer click the mouse on Yahoo! Maps. This option has been relegated to the memory boxes of the internet. New services like Google Maps, Apple Maps, and others now stand to serve you. I hope you found this exciting and relevant. Please let us know if you have any other questions, send us a message, tell your friends, and drive safe!